JFL - Progressing to a bigger stage.

The Borneo states of Malaysia; namely Sabah & Sarawak is deeply rooted with the heritage of head-hunters warriors from the native tribes of Murut & Dayak. These two states have also been producing many talented athletes for traditional martial arts such as Taekwondo & Karate. With the popularity of MMA catching on like wild fire, a number of gyms have sprouted up like mushrooms and many martial arts practitioner has been cross training in different styles. 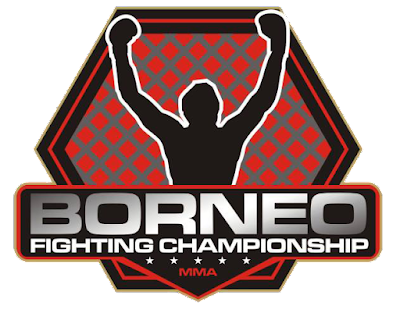 The first amateur MMA event in Borneo was Borneo Fighting Championship back in 2014 saw many fighters eager to test their skills, not only fighters but the support of the crowds was incredible. But when it comes to unearthing and new fighters and developing current ones, Borneon fighters faces a challenge as there’s was not much event being held here. Bigger events in Malaysia are mostly organized in West Malaysia and the cost of flight and accommodation limits more Borneon to participate

Recognizing this issue, Rayner Kinsiong (former ONE Championship Lightweight fighter) decided the time is right for another MMA promotion to be held. And this is how JFL was born. JFL was mooted as an idea by Rayner to serve as a platform for amateur MMA fighters to gain experience and build their records. JFL is named to pay homage to Kota Kinabalu’s old name from the British era.

This year JFL achieved the unprecedented for MMA event in Malaysia when it was announced by WSOFG (World Series of Fighting Global) as the first Malaysian MMA promotions to be affiliated with the world body. 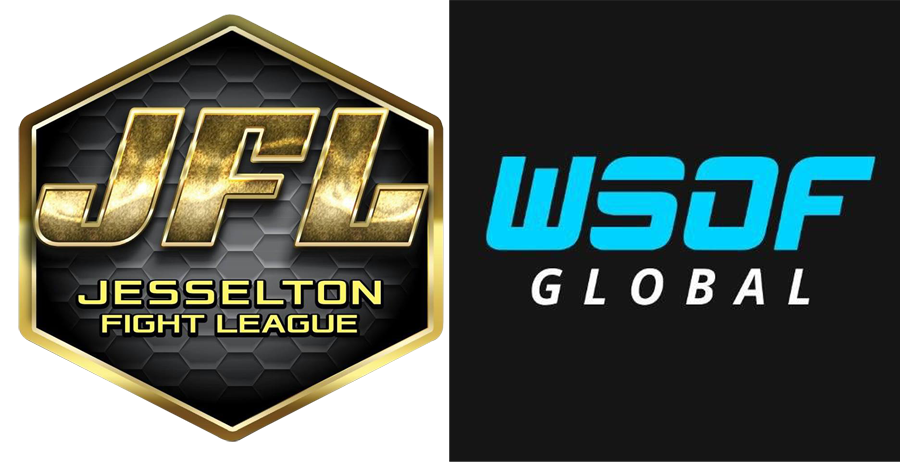 Realising the potential of such events to promote Sabah as a sports tourism destination, Ministry of Tourism and Culture Malaysia (MOTAC) - Sabah Office came in as main sponsor. And to top it off, it’s director Mr. Awang Ahmad Zaki will himself enter the cage to fight local Sabah singer & musician Appy Tots in a celebrity fight match-up. This will certainly boost interest among casual fans to come and watch. 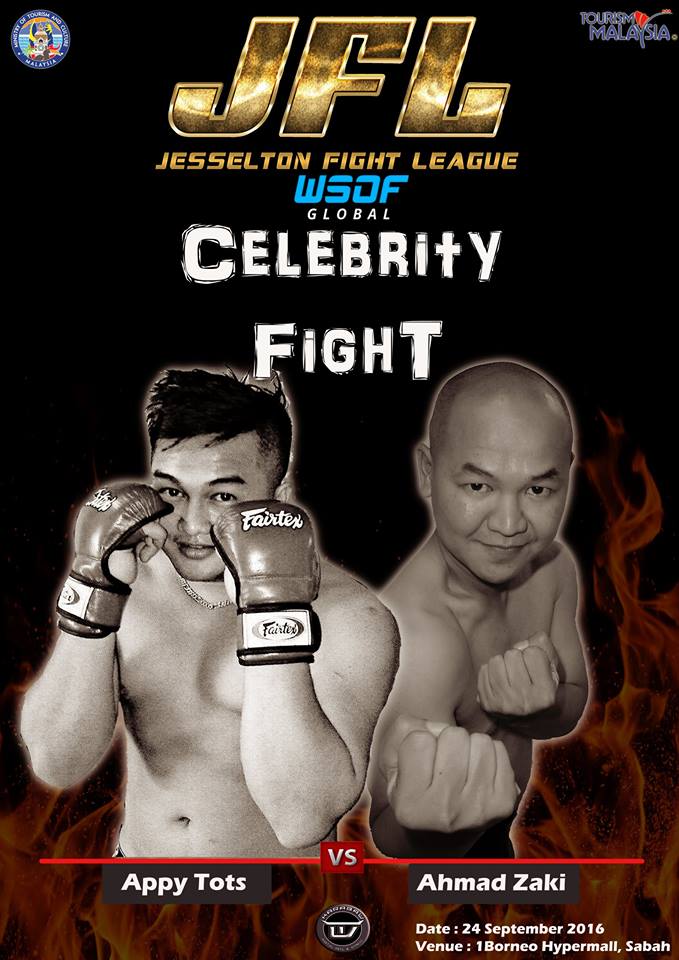 JFL was originally planned to be held inside a dance club and fight fans will need to pay to enter, but with the support of MOTAC and other sponsors, enable the organisers to move the venue to 1 Borneo Hypermall and open to public.

The main event will see Allen, whom is the former MIMMA1 (Malaysian Invasion MMA) lightweight champion and an alumni of The Ultimate Fighter China challenging Pinoy fighter Joben Superales in a bantamweight match. 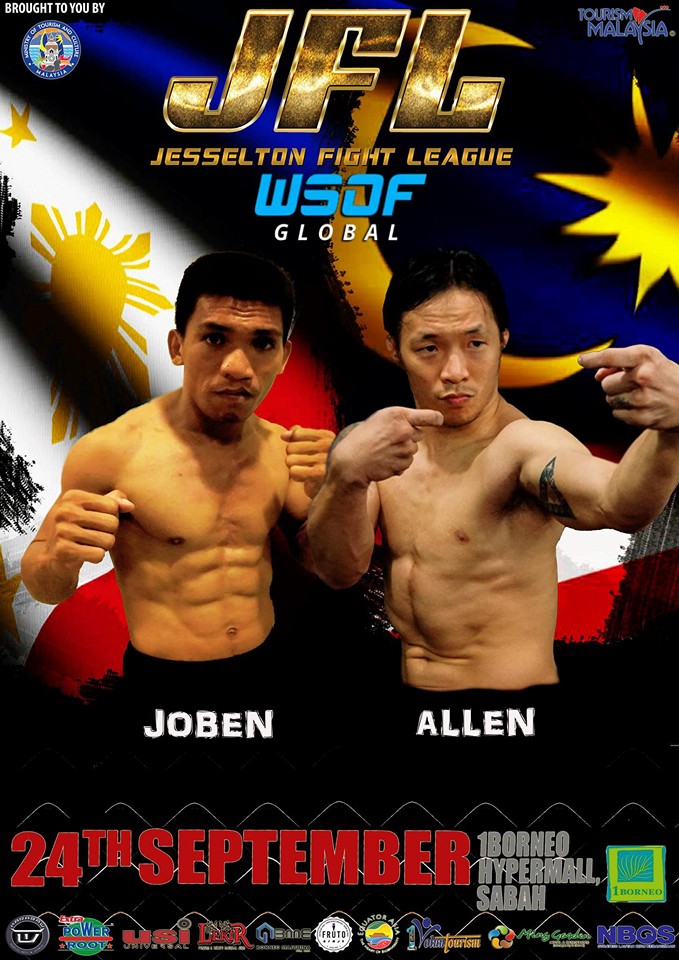 Allen is eager to bring home a win after his loss in June at Melbourne’s Hex Fight Series. It was a short notice fight vs Aidan Aguilera with a lost by uppercut. Being a prolific BJJ exponent, Allen is not taking any chances this time. He is boosting his striking skills and to do that, he is taking his time off from his architectural career to focus on his fight camp. He runs his Alpha MMA gym in Kota Kinabalu, but has been cross training in Kuala Lumpur at top gym such as Monarchy, Klinch and Muayfit.

As a person with a penchant for showmanship Allen plans to put on a great show.

“ In typical Kinabalu chaos, I’ll be comin’ in hot, guns blazing, hot and heavy! It’s guarantee to be a night of spectacle, fun and mayhem!”

He is looking forward to fight at home ground for a long time and he promise a great performance to give Sabahan something to cheer for, with the hope that this will further raise the level of awareness and support of MMA from the locals. In Allen’s mind, the memory of the loss in TUF China is the one that is pushing him ahead. He is out to proof that he is one of the best bantamweight in the region.

His opponent Joben Superales comes from the Philipines and from the renowned Hyper MMA. Trained since 2011 by Hyper MMA’s founder himself Arnel Lomibao. Joben has a typical flat boxer nose, and you know this is an indication of his hardness and experience.

Hyper MMA is sending 3 fighters which include Sensei Arnel himself and another of his student, Joemar Gallaza. In the co-main card at featherweight, Arnel will be facing Cody Young, an American with a 2-0 record.


Let’s take a look at this American fighter’s profile. Before turning pro, Cody fought actively in US in the Northwest Fight League. He fought 8 times, loss twice. Both losses coming from title shots bout.

Born in Portland, Oregon. Cody started his fighting days in basement bars. As he was only 19 then, he was dating a girl whose brother was a MMA fighter. He came to watch Cody’s underground fight. “ Hey, how would like to do cage fighting? You’ll actually get paid for it.” Why not, was Cody’s thought and he gave it a shot. After 3 months of actual MMA training, he won his 1st MMA match by triangle choke. That 1st win gave him an urge to have more fights. He cherish the build-up and the rush of fighting, especially in front of his family and friends, to him it is an amazing experience and this has kept him going for 9 years. 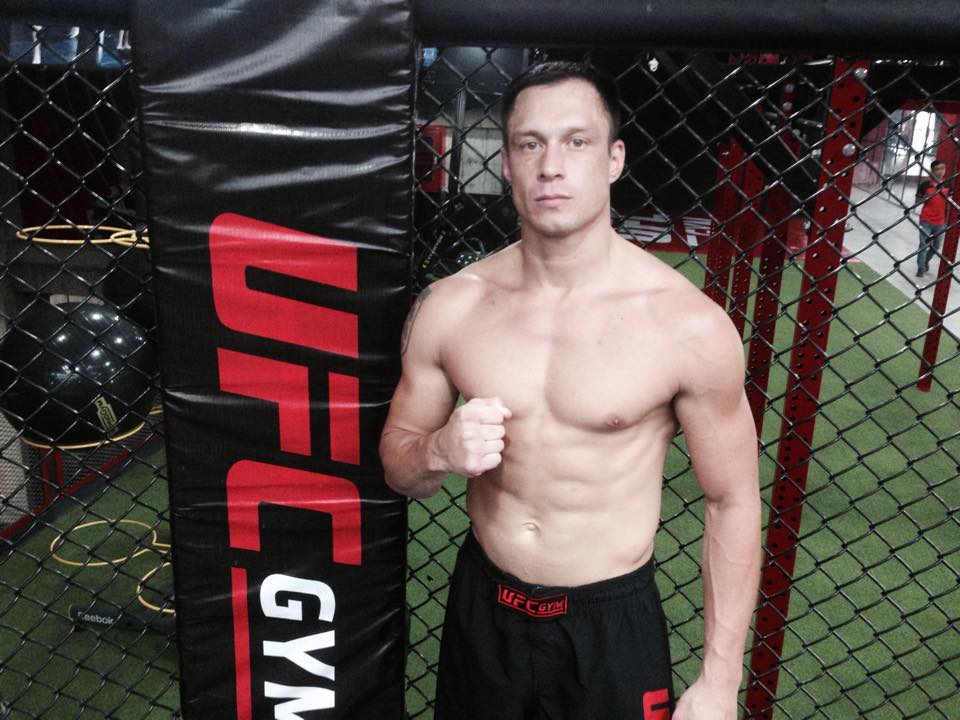 When he started, due to lacking knowledge to properly cut weight, Cody fought at lightweight and he was really underweight for that category. After learning the ropes and understanding his body more, he chooses to fight at featherweight (65kg), which he find that at his height of 172cm, he has the load advantage and he still have energy to pounce even after cutting weight from his normal of 77kg.

Cody is now a personal trainer and a MMA trainer at CMG in Hanoi. CMG also runs the franchise for California Fitness and UFC Gym in Asia. He met Arnaud Le Pont (former ONE Championship Lightweight) in Hanoi and has been training with him. Arnaud heads the UFC Gym in Hanoi and recommended Cody for JFL.

Cody is very excited to come to Kota Kinabalu and plan to make an impact in the MMA scene here. He is expecting an all-out war with Arnel, which is the kind of fight he loves. But he aims to finish the fight early in the second round with strikes. After that, he plans to savor the local culture and the magnificent seafood of Kota Kinabalu.

Arnel will not be an easy opponent. This hardy fighter grew up in the tough streets of Manila owns a 3-1-4 record mostly from regional promotion in Philipines. Trained boxing since he was 15, he picked up Kyokushinkai Karate when he was 20. This hard striking style of Karate became his base and when he picked up MMA 6 years later, he incorporate it well with his BJJ and is well known for his lightning speed and thunderous overhand.

Running his Hyper MMA gym and preparing his two students for fights with him in the same card kept him fully occupied, but with much discipline and determination he still managed to put in solid 2 hours of training in the morning and in the evening. Arnel is out to proof that he can do things once he set his mind to it and wants to test himself with the best out there.

At the lightweight co- main event, Adrian Tham another hometown favorites will take on his 2nd pro fight. Adrian will face Budi Kalbar of Indonesia. 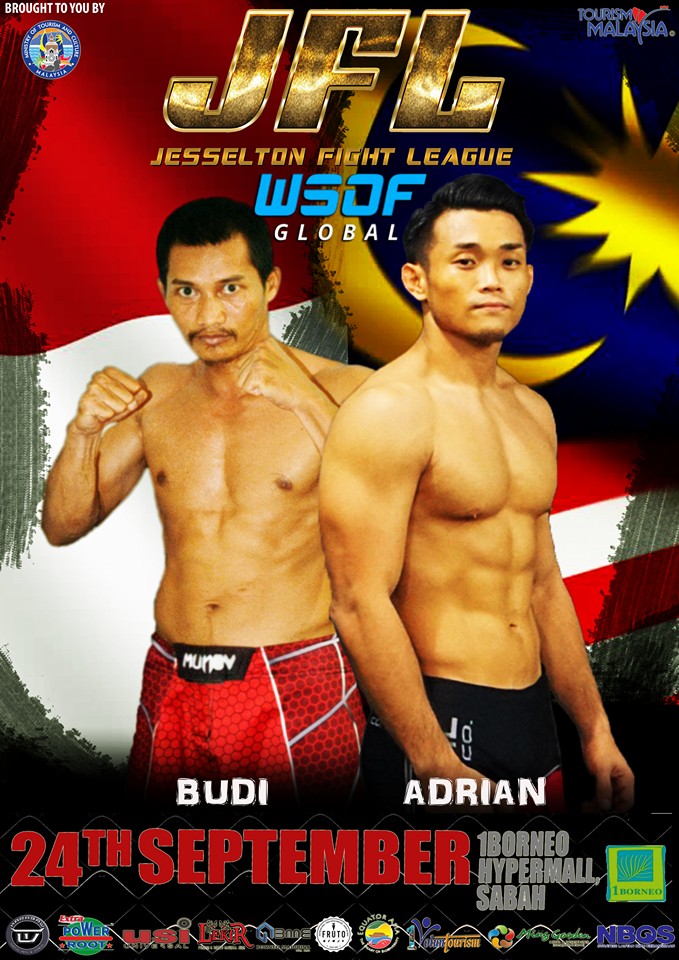 Adrian was the MIMMA1 Heavyweight Champion in 2013. He has good striking from his Taekwondo and Karate base but with his dedication to BJJ, has developed to be a high level BJJ exponent and has won many of his amateur fights by submission. Moving to welterweight in his 2015 JFL, he scores all his fights by submission finish and took the championship belt with ease.

His debut pro fight was at Yodhha Fighting Championship (YFC) in August 2016 in Buhubaneswar India. He faced home town favorites and experience fighter Srikant Sekhar. It was a 3 round battle that Adrian lost by decision.

Adrian is looking to let the home ground advantage psyche him up for a good fight vs Budi. Budi Kalbar is an Indonesian boxer. He has been in Sarawak teaching boxing and train striking. His most recent MMA fight was against Asian most active and former UFC fighter, Will Chope. They fought in Singapore Fighting Championship 3 in June. He lost by TKO in round 1. 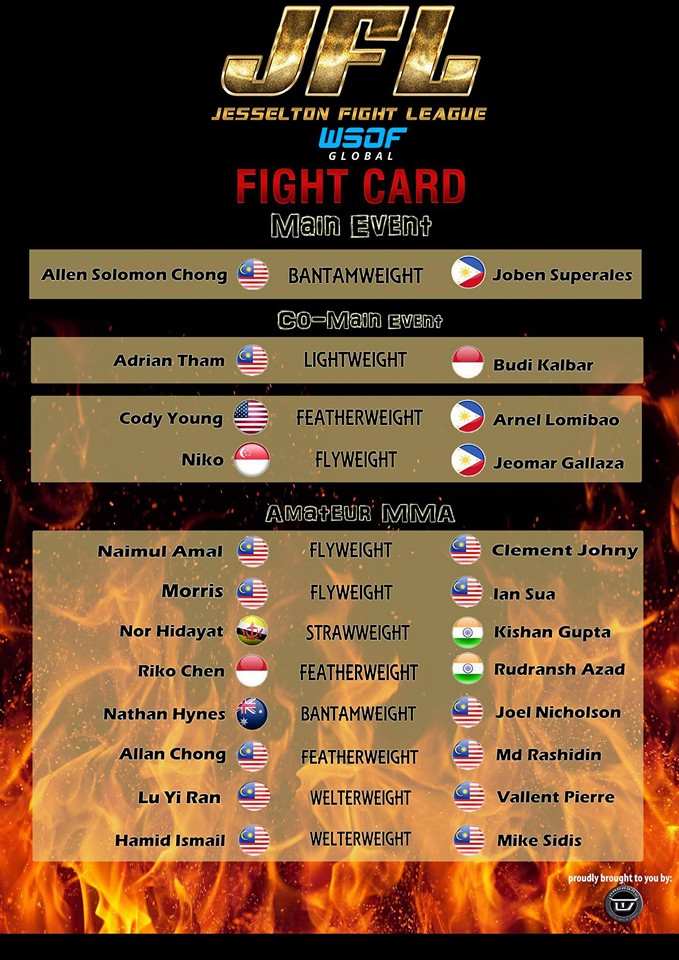 Making a come back to MMA is MIMMA3 stalwart Naimul Amal of Ultimate Malaysian Fighter (UMF). He reached the Contender Fight of MIMMA3 in 2015 but lost to his own brother Dhiaaul Amal. 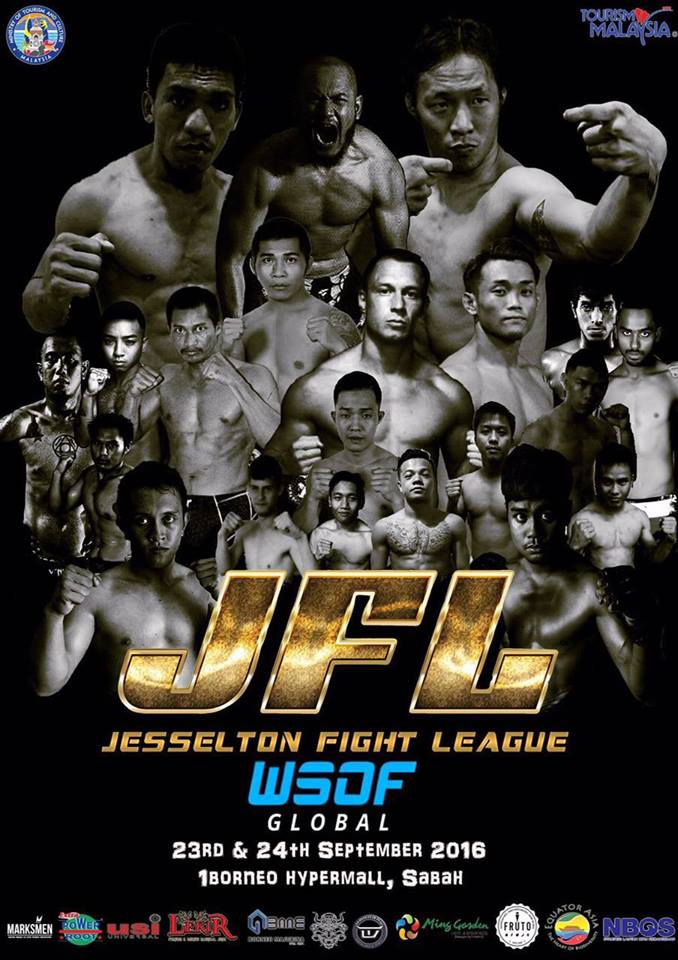